Weapons and Fighting Techiniques of the Medieval Warrior: 1000-1500 AD 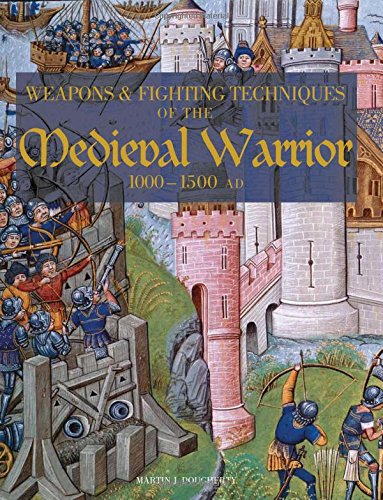 Weapons and Fighting Techniques of the Medieval warrior offers an highly-illustrated fact-filled introduction to the weaponry and fighting methods of the Middles Ages. Divided into four chapters, the main types of Medieval warrior are covered separately: mounted knights, foot soldiers, missile troops and siege engineers and sappers.

The popular image of the mounted knight dominating the battlefields of Medieval warfare was far more compelled. Although rarely celebrated in Medieval art or literature, the weapons, technology, and techniques of the ordinary foot soldiers, such as the longbow men and pike-armed landsknechts, had a revolutionary impact on the development of warfare in the middle ages. Disciplined groups of archers were able to defeat better-armored and numerically superior forces of noble knights at battles such as Crecy (1346) and Agincourt (1415), while the development of tightly packed formations of pikemen came to definite military encounters from the early fifteenth century. More significantly, the introduction of gunpowder weapons in the mid fifteenth century had a fundamentally democratizing effect on the way battles were fought and ended the power of heavily-armored cavalry. Written in an accessible style for the non-expert, the book shows how the development of new weapons technology and techniques came to change the face of European warfare from 1,000 to 1,500 AD.

Be the first to review “Weapons and Fighting Techiniques of the Medieval Warrior: 1000-1500 AD” Cancel reply

Weapons and Fighting Techiniques of the Medieval Warrior: 1000-1500 AD
Buy Now
About Childread