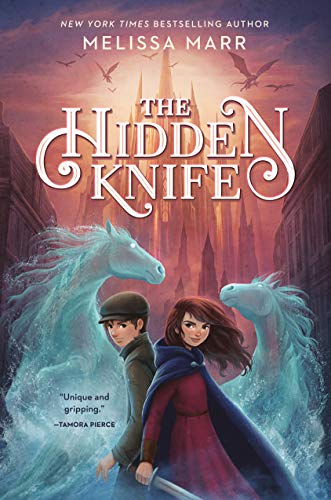 New York Times bestselling author Melissa Marr invites readers into a magical world where stone gargoyles live among humans, ferocious water horses infiltrate the sea, and school hallways are riddled with magic wards–and where a group of young heroes seeking justice discovers those very creatures are the best of allies.

Twenty years ago, a door opened between the world of humans and the Netherwhere, allowing all kinds of otherworldly creatures entry. Fortunately the wise and wonderful gargoyles show a special affinity toward humans (the fairies and kelpies are another matter!).

Vicky has grown up under the watchful eye of a gargoyle named Rupert, and excels at sword-fighting and magic. But there's so much she doesn't know–like why her mother, once one of the queen's elite Ravens, keeps Vicky hidden away and won't let Vicky train at the elite Corvus school where girls with her gifts perfect their skills. But when a horrific tragedy occurs, Vicky knows the only place she should be to avenge the crime against her family is at Corvus. There she bands together with a former street thief and an alchemy student to figure out whom they can trust in a place that's rife with intrigue and secrets. And all the while, the gargoyles are watching. Time is fluid to them and they know change comes in small ripples. With their steadying influence and encouragement, Vicky and her friends just might be able to help good grow in their kingdom.

Be the first to review “The Hidden Knife” Cancel reply