The Cooper Kids Adventure Series 2-in-1 Book: Includes: The Secret of the Desert Stone and The Deadly Curse of Toco-Rey

50 Adventures in the 50 States

4 Kids On An Adventure: And a Rhododendron Named Karen

Kids’ Outdoor Adventure Book: 448 Great Things to Do in Nature Before You Grow Up

Cooper Kids Adventures Series Set of 8 Volumes Include Door in the Dragon’s Throat, Escape From the Island of Aquarius, Tombs of Anak, Trapped At the Bottom of the Sea, Secret of Desert Stone, Deadly Curse of Toco-rey, and more

Artsy Fartsy the Farting Penguin: A Story About a Creative Penguin Who Farts 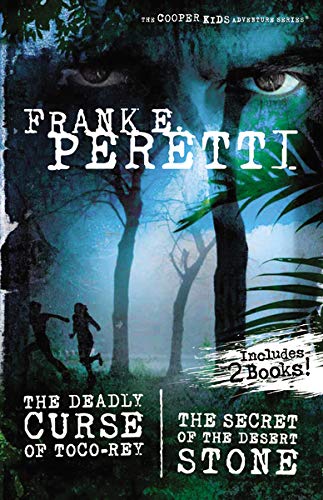 Two of the top-selling books in The Cooper Kids Adventure Series are now in onevolume. Children will love embarking on these thrilling adventures:

TheSecret of the Desert Stone: Biblicalarcheologist Dr. Jacob Cooper arrives in Togwana with his children Jay and Lilaand one goal―to discover the secret behind the two-mile-high Stone that hasmysteriously appeared overnight. The Coopers’ uneasiness soon turns into dreadas they are watched and threatened by the country’s new government and brutaldictator Idi Nkromo.

TheDeadly Curse of Toco-Rey: Lila andJay Cooper have joined their dad on a mission to the jungles of Central Americawhere a group of American treasure hunters have already become the victims ofthe deadly curse of Toco-Rey. Before Dr. Cooper can solve the mystery, hischildren are kidnapped and his integrity is put to the test. What price will hepay to get his children back?

Followthe Coopers as they explore unknown ruins, plunge through dangerous jungles,face hostile natives, and battle ancient evil forces. Will their courage andfaith in God bring them through?

Be the first to review “The Cooper Kids Adventure Series 2-in-1 Book: Includes: The Secret of the Desert Stone and The Deadly Curse of Toco-Rey” Cancel reply

The Cooper Kids Adventure Series 2-in-1 Book: Includes: The Secret of the Desert Stone and The Deadly Curse of Toco-Rey
Buy Now
About Childread