Choose Your Own Minecraft Story: The Zombie Adventure 2: Journey to the Ender

Kids’ Outdoor Adventure Book: 448 Great Things to Do in Nature Before You Grow Up

Artsy Fartsy the Farting Penguin: A Story About a Creative Penguin Who Farts 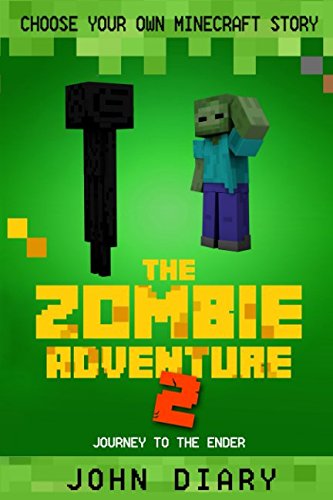 The Golem says there is only one way home… through The End.

The best-selling adventure continues! You have woken up one day as a zombie inside the game of Minecraft and you’re desperate to find your way back home. Luckily, an ancient stone golem thinks he can help you. You’re not the first player to be trapped here, the golem tells you, there was one other…

They were able to get home, but only by going to that dangerous realm they call… The End.

Do you have what it takes to solve the maze and find the End portal? And even if you do, how will you find the ender pearls you need to activate it?

There are many stories to find in this book: a hilarious, old, blind lady, a clueless gang of endermen, a very paranoid shopkeeper, and so much more. And as always… you choose!

The words bounce around the inside of your head. What does he mean? You stare up at the Elder Golem whose stone face doesn’t make his words any less mysterious.

It had been a pretty confusing day. Probably the most confusing day in your whole life. You’d woken up as a zombie. And not just any zombie. A zombie in a game… A zombie in Minecraft. You’d been hurried out the door by a bossy skeleton who apparently could talk?! That was confusing enough. And you’d met creepers who apparently didn’t want to blow up players but just got so excited about being around them that they literally blew up. Very confusing. And then you’d been told some confusing story about someone who’d gotten stuck in the game before and been confusingly brought to this place, with this monstrous golem who was supposed to help you get home.

And somehow, him saying ‘Chosen One’ was still the most confusing thing that had happened all day.

Well if not the most confusing. At least a very close second.

Maybe he’d made a mistake. Maybe you’d misheard him. Maybe he’d said ‘frozen bun’ or ‘Cho and Juan’ or ‘crows in nun’. Actually… now that you think about it, that might be more confusing.

“Excuse me, Mister Golem,” you say, “did you just say Chosen One?”

The golem raises one massive, stony eyebrow and frowns. It makes the sound of a small earthquake.

Both his mossy eyebrows narrow to a point in the middle of his forehead. It makes the noise of a slightly bigger earthquake.

What is he thinking?, you ask yourself silently. It is impossible to read that big, stony face.

Slowly the golem opens his giant mouth to speak. “Who’s Juan?” he says with a voice of pouring gravel.

You squint at him, not knowing what to say.

After a second, he gets over it. With an ear-splitting grinding noise, the elder golem turns on his heel. “Come Chosen One, there’s no time to waste. We have to send you home,” he says and begins to walk off. Each step vibrates the ground beneath your feet.

Do you follow the golem, or tell him that you’re not the ‘Chosen One’?

Make your choice and continue the story inside!

Be the first to review “Choose Your Own Minecraft Story: The Zombie Adventure 2: Journey to the Ender” Cancel reply

Choose Your Own Minecraft Story: The Zombie Adventure 2: Journey to the Ender